Fairie Ferris Wheel For The Garden 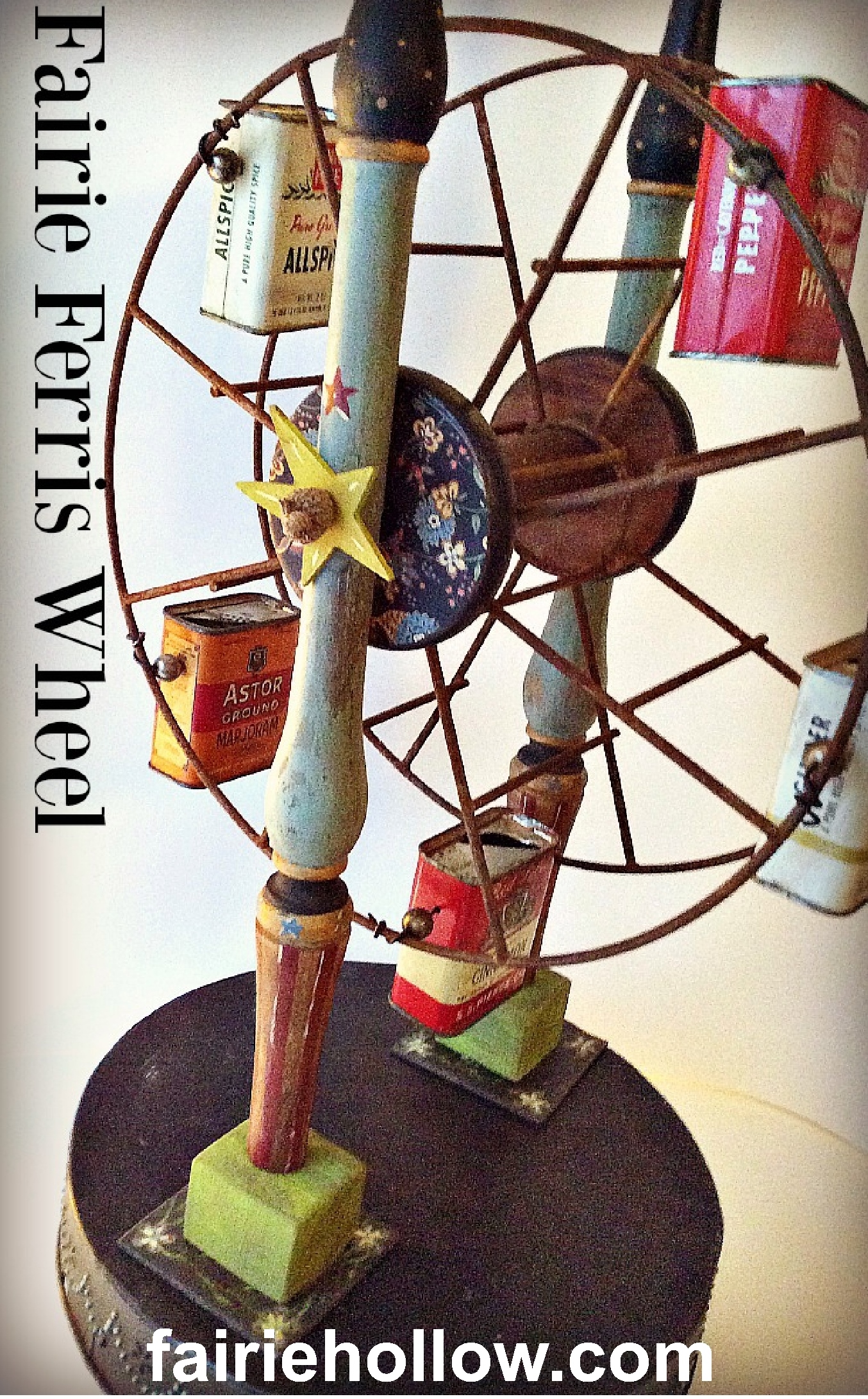 Just in time for the fairiefest is this ferris wheel made from a collection of vintage spice cans.

The ferris wheel itself is a wire electrical spool found at a little store when I was traveling. Some of the best things I have found have been sitting in a corner of a store or in the yard where no one looks.

I drilled holes through each can and wired them to the wheel.

The base is a round metal tin.  I simply turned it upside down and it became a sturdy base to attach the spindles to.

The spindles are from an old chair. Remember, anything that looks interesting can be used in so many different ways. Painting the spindles gave them a circus feel.

The spools have a hole drilled through them so I got a little dowel and measured it so I could run it through the spool to attach the spindles on either side. The yellow stars were added last minute for fun. They were drilled the same size as the dowel as were the tops of the spindles so they were nice and tight. I glued the holes and spindles and let it dry. A couple of little acorns hide the end of the dowels.

The last thing was attaching the spindles to the base. I found two little squares of wood and two flat pieces and painted a star on them then drilled a hole up into each spindle and each piece of wood. This helped stabilize the spindles when the screws were screwed under the metal base into the spindles.

And Voila! Fairie Ferris Wheel is ready for the garden! I hope you will try making one yourself!

More from my site

Searching is in progress

We use cookies on our website to give you the most relevant experience by remembering your preferences and repeat visits. By clicking “Accept All”, you consent to the use of ALL the cookies. However, you may visit "Cookie Settings" to provide a controlled consent.
Cookie SettingsAccept All
Manage consent

This website uses cookies to improve your experience while you navigate through the website. Out of these, the cookies that are categorized as necessary are stored on your browser as they are essential for the working of basic functionalities of the website. We also use third-party cookies that help us analyze and understand how you use this website. These cookies will be stored in your browser only with your consent. You also have the option to opt-out of these cookies. But opting out of some of these cookies may affect your browsing experience.
Necessary Always Enabled
Necessary cookies are absolutely essential for the website to function properly. These cookies ensure basic functionalities and security features of the website, anonymously.
Functional
Functional cookies help to perform certain functionalities like sharing the content of the website on social media platforms, collect feedbacks, and other third-party features.
Performance
Performance cookies are used to understand and analyze the key performance indexes of the website which helps in delivering a better user experience for the visitors.
Analytics
Analytical cookies are used to understand how visitors interact with the website. These cookies help provide information on metrics the number of visitors, bounce rate, traffic source, etc.
Advertisement
Advertisement cookies are used to provide visitors with relevant ads and marketing campaigns. These cookies track visitors across websites and collect information to provide customized ads.
Others
Other uncategorized cookies are those that are being analyzed and have not been classified into a category as yet.
SAVE & ACCEPT